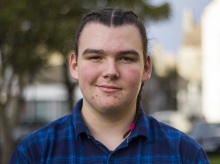 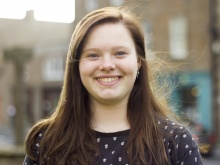 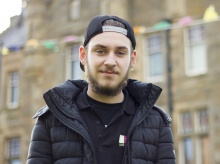 A group of teenagers have made a film to show adults the reality of life growing up in in their rural community.

Mac Cook, 16, and his friends all live on Orkney, a group of islands located ten miles north of mainland Scotland.

They want to highlight the particular challenges teenagers face there and to call for more for them to do and better public transport links.

‘We want adults to try and put themselves in our shoes to see things from our perspective,’ says Mac.

Originally from Birmingham, he moved to Orkney when he was 11.

‘The contrast between living in Birmingham and then moving to Orkney was massive,’ Mac explains.  I went from living in a big city to a rural community.’

The student says life on Orkney is made difficult because public transport links are poor and social isolation is a real issue for many young people.

‘I live in the countryside and the bus timetables are horrible to try and get used to,’ he says.  ‘I usually have to apply myself to make sure I can even get home at night.’

Fellow Fixer Lara Hales, 16, adds: ‘The latest bus you can get is 10.50pm from Kirkwall to Stromness.  It’s fine if you live along that route but if you don’t, you have that feeling of being trapped.’

Finding things to do to entertain themselves is a real issue for many young people there.

‘Living on Orkney can be quite boring at times,’ says another member of the group, Tam Lin, 17.

The group says that underage drinking and drug taking is an issue affecting some young people on Orkney as there is so little to do.

The Fixers say they can sometimes feel stifled by their parents who worry that they may drink or take drugs in a bid to escape the boredom.

‘My parents don’t want me going down the path of using drugs’, says Mac.

‘They think it’s safer for me to stay indoors, which I don’t disagree with, but it makes it means I can’t connect with my friends a lot of the time.’

Hopeful that they will inspire the older generation to instigate positive changes, the film ends with the message: ‘We’re Orkney’s future, help us to grow up’.