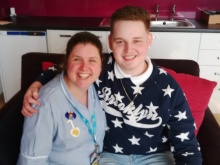 Fixer Ben Clifton with one of his nurses 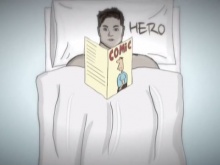 An image used in the Fixers animation 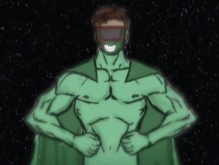 The Fixers film has a superhero theme

He was diagnosed with a brain tumour two weeks after his 16th birthday, now a Fixer from Peterborough is urging others to channel their inner superhero to fight cancer.

Seventeen-year-old Ben Clifton is campaigning to inspire hope among others with serious illnesses.

‘I wanted to do something to help people stay happy and positive through life-threatening conditions,’ says Ben.

‘You often see the negative side, but there are people that get the all-clear and go on to live for many years doing everything they want to do.’

With the help of Fixers and his friends, Ben has created an animated film with a superhero theme to share his experiences.

Watch ‘Ben’s Guide to Beating Teenage Cancer’ at the top of this page.

‘The film is based on me. It shows what I went through and how I came out strong. The idea is to encourage people not to give up easily.’

Ben’s sketches of superheroes inspired the animation which tells his story in the style of a rap.

He hopes it will stop people fearing the word cancer.

‘I think the film is brilliant,’ Ben explains.

‘It’s funny but also sends out a powerful message. It really stands out.

‘I want it to prevent young people from thinking the worst.’

Ben, who is receiving treatment for his tumour, plans to share the film online to reach as many people as possible.

He’s also enlisted the help of some of his teachers to share it at school.

‘When I went through chemo, I focused on the idea of a superhero,’ he says.

‘Everyone can have a superhero. Mine gives me the power to defeat cancer.

'I hope this encourages others to keep up the fight.'

Faced with his own cancer diagnosis, Stephen Sutton is inspiring others
to live life to the full. Watch his TV story.