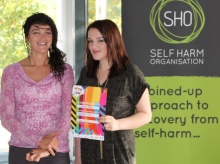 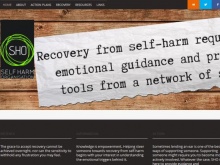 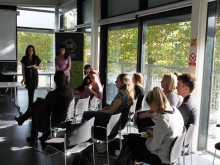 Imogen engages with the audience at her website launch event

A 23-year-old woman from Bristol, who self-harmed during her teens, has launched a website to help those supporting other young people like her.

Imogen Smith started the Self Harm Organisation online with the help of Fixers.

She wanted the website to offer information and action plans for family, friends, teachers and professionals, so they each know the role they can play in helping someone who is harming themselves.

‘I think the website looks amazing. I absolutely love it,’ says Imogen.

‘Not only is the information displayed clearly, the whole design looks really professional.

‘It is accessible, stylish and I think people will be drawn to it.'

‘He tweeted about our organisation and mentioned us on Facebook. I thought it was amazing,’ adds Imogen.

‘I emailed him as he’s interested in this area. I explained what I was doing and asked if he could help in any way and he messaged back the same day. I’d only just started the Facebook account so it had around 20 likes. Now it’s in the hundreds!’

To officially launch the website and her campaign Imogen held a forum at The Pavilion on the Harbourside in Bristol on Wednesday 23rd October.

Among those invited to speak were Professor David Gunnell from the University of Bristol, who is a leading expert on the reasons for self-harm, and Imogen’s mum, Jane Smith, who is the Director of Anorexia and Bulimia Care.

Describing it as a ‘great day’, Imogen says: ‘People have been thanking me for sharing my story and for the website.

‘Lots of people I’ve met want to make contact again - they’ve asked if I’ll speak at events and help with teacher training. It makes me feel like I’ve started something rather than it being the end of my Fixers project.’

Visit the Self Harm Organisation website by clicking the image below.