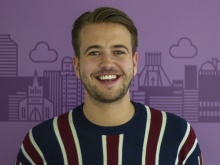 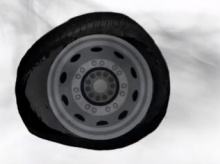 There is no legislation limiting the age of coach tyres 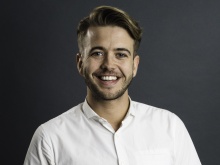 Six years ago Ben Dalton was enjoying a holiday in Ibiza when he received news there had been a bus crash back home involving people he knew personally.

The crash, which had a devastating effect on close friends in his community, was caused by a tyre nearly twenty years old.

Ben, 26, from Liverpool, is now urging people to contact their local councillors and press them to impose age limits on tyres fitted on buses and coaches.

‘There aren’t any rules or age limits on how old a tyre should be on a bus or a coach,’ he explained. ‘I really want to help change the law, to make a difference and to save lives, because at the moment, people’s lives are being put at risk because of something so simple that can be changed, and we can all do something to help.’

Tragedy struck in September 2012 when a coach full of young people coming home from a festival crashed. Three people died, and many others were left with life changing injuries.

Investigations revealed the crash was caused by a 19-year-old tyre blowing out.

Following an inquest into the crash the coroner wrote to the Government appealing for legislation to ban tyres older than 10 years from being used by coaches or mini-buses.

The Department for Transport did not implement this change in legislation but instead amended the safety guidelines of public service vehicles, recommending tyres over 10 years should not be fitted.

But these guidelines are impossible to enforce.

In January 2018 the Government stated legislative changes should be ‘evidence led’, and ordered 12 months of research into the deterioration of tyres on public vehicles.

Ben has teamed up with Fixers to create a video which explains why the age limit is so important. The animation shows the difference between hollow car tyres and solid coach tyres. Over time this rubber stiffens and its integrity decreases.

His project has the support of the Tyred campaign, which was set up by Frances, the mother of 18 year-old Micheal Molloy, who died in the crash, and aims to impose a ten-year age limit on tyres.

‘I just think we know ourselves from what’s happened and from what the coroner said that Michael’s death was because the tyre blew, this is something that can be changed and will save lives.’

He hopes his video will educate people on the Tyred campaign, and encourage them to take action in writing to their local councillors, to ensure that a similar tragedy will not happen again.

‘This is really important, because a lot of schools and community organisations take their young people to school trips on these coaches. It is also important for Michael, Kerry and Collin, who lost their lives because of something that could have been easily avoidable.’

Ben’s project was supported by the Road Safety Trust.