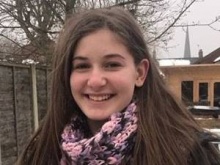 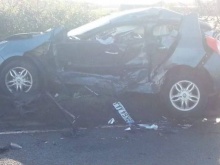 Cassy's sister was in a crash 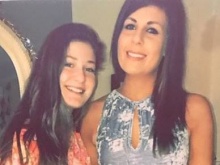 Cassy with her sister Becky

Cassy’s older sister Becky was nearly killed by a driver using his phone behind the wheel.

Now, two years since the accident which left Becky with a ruptured spleen, broken pelvis, fractured ribs and a broken arm, Cassy has a strong message for drivers tempted to make a call.

The 14-year-old from Hinkley has made a film telling people there is no conversation so important that other people’s lives should be put at risk.

‘I don’t think drivers realise the dangers of what could happen,’ Cassy said. ‘A life is more important than a phone call or text message.’

Cassy’s sister Becky had been driving to work in March 2016 when a van driver, who had been using his phone, swerved into oncoming traffic. Becky, who was 26 at the time of the accident, attempted to dodge the van, but hit the curb and smashed into another car before ending up in the ditch.

Her car was so badly damaged Becky had to be cut free at the scene by firefighters.

She was rushed to the University Hospital Coventry, where she stayed for nine days before discharging herself.

Becky was told by the police if her three-year-old daughter had been in the car she would have died, as the direct impact was on the passenger side where her car seat was.

‘I remember coming home from school and my parents were really upset and when I asked what was wrong they explained my sister had been in an accident and was in hospital,’ Cassy explained. ‘I was so shocked. It was my big sister, who I looked up to, lying strapped to a bed; I was panicking and worried and crying a lot.’

The van driver was subsequently charged with driving without due care and received three points on his licence and a fine.

Cassy and Becky’s mum, Yvonne said the accident has knocked Becky’s confidence and even now, two years on, she will not drive anywhere new.

Her message to anyone thinking of using their phone while driving is simple: ‘A phone call is not worth a life or prison sentence and the upset and long term problems you cause someone else.’

Cassy’s project is supported by the Road Safety Trust.