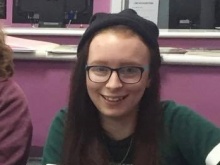 Music can help to ease depression

Depression is an all too common part of modern life in Britain – and the condition can be deadly.

That was the sobering realisation made by Folkestone student Atlanta Slater, after two young women in her local area recently took their own lives.

‘I’d met one of the girls a few times, she was really good friends with one of my best friends,’ says Atlanta, 17. ‘I didn’t know the other young girl personally, but other people I know did.’

The tragic loss of young lives made Atlanta and her friends at Folkestone’s Shepway Youth Hub think hard about life – and about mental health. Now they’ve made a viral film to launch their campaign to urge sufferers of depression to reach out and seek help.

Atlanta has never suffered from clinical depression personally, but she’s seen friends struggling with the cruel condition, and with other mental health issues.

‘I think that people still feel ashamed of themselves for having a mental health issue, some people don’t like to think that they have one, they keep it bottled up like it’s something that they should be ashamed of,’ says Atlanta.

‘That stigma needs to change to people thinking "if you have a mental health issue, you need to let people know". At some point in their life, everyone will suffer from some kind of mental illness.

The film, created with the help of media professionals from Fixers, encourages viewers to express themselves creatively through painting, singing and writing as well as socialising.

‘We want people to know that it is ok to have a mental illness,’ Atlanta explains. ‘And the most important thing is to seek help – medically or through friends and family. Don’t keep it to yourself, but let people know how you are feeling.’

‘But if you still don’t feel like you can tell anyone, do find another way to help yourself by expressing your emotions, as it’s so important. Don’t just keep it inside and let it bubble away and break you down to the point where you hit a crisis.’

And the film is just the start of the group’s campaign to improve the area’s mental health. They’re planning a screening at the Youth Hub to share their film with local young people.

‘We also plan to create an event with workshops for people to explore different methods of expressing themselves,’ says Atlanta. ‘We’re hoping to get musicians, local writers, poets, photographers and others who can put on small workshops with young people, showing how to express how they feel through different art forms and different ways of writing.’

Atlanta’s greatest hope is that this project will persuade local people with mental health
issues to reach out for help. ‘We hope that by finding ways to express themselves, it will hopefully stop more young people wanting to commit suicide.'