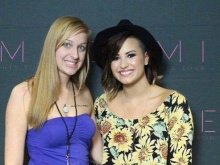 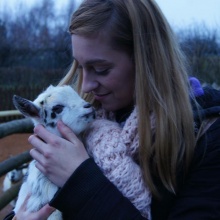 A young woman who self-harmed from the age of 13 has told Fixers how meeting pop star Demi Lovato inspired her recovery.

Abbie Foster, 20, began hurting herself after she was bullied at school.

She says: ‘It started with just flicking myself hard with a bobble on my wrist whenever I felt upset. I don’t think I realised it back then, but I was using it as a coping mechanism.’

Abbie, from Norwich, East Anglia, says: ‘When it stopped giving me satisfaction, I began using sharp objects instead.

‘I didn’t have much self-esteem, and people just picked on me because they sensed I was weak and wouldn’t fight back.

‘One boy told me I should kill myself, and if he didn’t, he would do it for me.

‘I spoke to the teachers who intervened and punished the bullies, but it didn’t stop, so eventually I stopped reporting it.

‘I began taking it out on myself and self-harmed as a way to take my mind off school.’

But when Abbie heard Demi Lovato’s song Skyscraper on the radio, it led to the first step on the road to recovery.

She says: ‘The moment I heard the song it inspired me and showed me that I too could ‘rise’.

‘As soon as I got home I looked up Demi Lovato and saw that she had battled with self-harm and depression too.

‘I thought that if she could get through it, with all the pressure she faces in the spotlight, then I could too.’

Demi lifted the lid when she was presenting the X Factor in 2012 and told how bullying and depression led her to self-harm.

But recovery wasn’t easy as Abbie had grown dependent on self-harming and had been using it as a coping mechanism almost every day.

She says: ‘It was hard; I had to learn a new way of coping. Exercising helped me a lot.'

Following her journey, Abbie is working with Fixers to show other young people that recovery is possible.

With Fixers, she has created a set of cards featuring inspirational quotes and suggested goals, such has smiling at five people, or holding the door open for someone.

She says: ‘You walk around and see people down in the dumps and if you smile at them, they smile back. A smile is contagious. I don’t understand people being so grumpy or angry all the time. Life’s too short.’

Click on the image below to see a larger version of the cards. 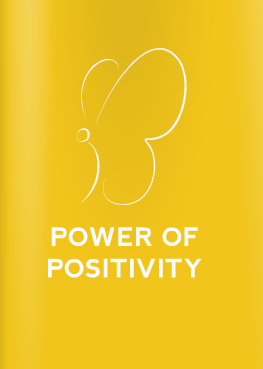 Shortly after hearing Demi on the radio for the first time, Abbie got the chance to meet her at her World Tour in Raleigh, North Carolina, in September 2014.

She says: ‘A friend knew how much I admired her and bought me a surprise ticket.

‘I was over the moon. I’d recently had a tattoo done that reads ‘Now I’m a Warrior’, which Demi also has on her back.’

As soon as Demi saw Abbie at the arranged photo-signing, she spotted the tattoo.

Abbie, who is a waitress, says: ‘She smiled and said ‘you have the same tattoo.’ I explained I got it to mark 100 days of not self-harming, and she gave me a massive hug and told me how proud she was of me.

‘I needed someone to tell me that life gets better, and that someone was Demi Lovato.

‘Talking about self-harm was a crucial step in my recovery. By speaking out, she showed that there’s nothing to be ashamed of.