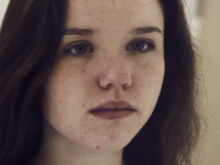 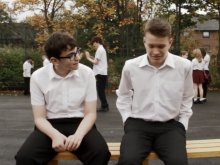 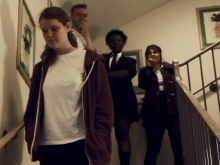 A young person is bullied in the film

Charlie Sanderson is using her experience of growing up in foster care to encourage others not to define a person by their home life.

The 17-year-old from Blackpool thinks looked after young people are often singled out and seen as failures, which is something she hopes to change.

‘When I first went into care at the age of 13, it was a really confusing time,’ explains Charlie.

‘Everyone was a stranger and I felt so alone. It was like starting life again.

‘School was a struggle before I went into care, but even more so afterwards. People would ask where my mum was and say I would never amount to anything.

‘But something just clicked and I realised I could do more with my life.

‘Just because someone has grown up in the care system, it doesn’t make them a lost cause.’

With Fixers, Charlie and her team have helped to produce a film to get their message across.

It follows a group of young people who are targeted by bullies for being in care and shows the devastating impact of their hurtful words.

Watch Charlie and her group’s Fixers film 'Words Have Power: Looked After Children' at the top of this page.

‘I think the film is amazing,’ says Charlie.

‘The idea was to show the power of words and how they can affect others.

‘If a looked after child is constantly being put down, it can have a major impact on their self-esteem and future aspirations.

‘They are no less capable than anyone else, which is what I hope the film highlights.’

Charlie, who hopes one day to become a social worker and use her experiences to help others, wants to share the film in local schools and colleges.

‘It’s crucial we get this message out there,’ she says.

‘My message is “think before you speak,” but I also want to tell others in my shoes to never give up. It’s not too late to change your life.’