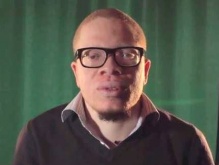 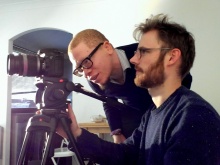 Daniel helps out behind the scenes at the film shoot 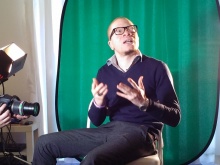 Having experienced discrimination because of the colour of his skin, Daniel Richards is challenging the superstitious beliefs that shape the way some cultures view albinism.

Daniel, who’s 22 and lives with the condition, wants to help others better understand it, while highlighting the mistreatment albinos can face abroad.

‘This is about the stigma attached to albinism all over the world, but in particular in parts of Africa,’ explains Daniel, who grew up in Cameroon and now lives in Essex.

‘Their body parts are thought to bring wealth, and their hair is considered a lucky charm.

‘There are a lot of gruesome consequences - like human sacrifice.’

Albinism is a genetic condition that affects the production of melanin, the pigment that colours skin, hair and eyes.

Depending on the amount of melanin a person has, they can appear pale.

In places like Tanzania, those with albinism are at risk of being attacked and killed, as a result of cultural beliefs.

‘The real cause is ignorance,’ comments Daniel.

‘Educating others is my main concern.

‘I want to show them that just because people with albinism have white skin, it does not mean they are an abomination.’

With Fixers, Daniel has helped to create a film to share his story. He documents the discrimination he’s experienced being albino in the face of ingrained superstition.

He also calls for an end to the persecution of those with the condition.

Watch Daniel’s Fixers film at the top of this page.

Daniel adds: ‘Most people are not aware of what is happening in Africa as it’s not spoken about.

‘They don’t know the tribulations or the suffering or the fact that a lot of those with albinism are dying of skin cancer.

‘I’m hoping someone will understand the plight of albinos.

‘Right now, I am the voice of the voiceless. But I will be heard.’

Tamanna Miah from Kent is also highlighting the damaging effects of
discrimination. Watch her film to see how she’s tackling racist bullying.